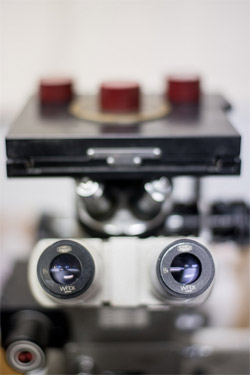 One of the most common tests done here at QC Metallurgical is SEM / EDS Analysis. This analysis can determine the composition of the material of a sample by measuring the energy and intensity distribution of X-ray signals generated by a focused electron beam on the specimen (EDS). For example, a manufacturing company was about to order millions of dollars worth of product based on the fact they already thought they knew what material it was. After testing just one sample for their qualification purposes, we were able to alert them to the fact that their material wasn’t what they thought it was. In turn, saving them incredible amounts of money.

An individual came to us once with some old wires and rods that he had found in his mother’s attic. She was about to be evicted and family and friends were looking for anything worth value to be able to sell so that she could keep her home. We analyzed his samples for him in hopes of giving him some good news. Turns out, the wiring and rods were found to be platinum. Not only could she have stayed in her home after that find, she could have bought it.

Another common test here is Hardness Testing. This can determine the samples ability to resist being permanently deformed (bent, broken, have its shape changed) when a load is applied. A boat owner had one of our technicians go on-site to analyze the boat mast by Hardness Testing. It had been struck by lightning and he needed to make sure that the strength had not been compromised as a result of this. We were happily able to tell him that day that his mast was unaffected.

The landing gear of an aircraft had drug the ground slightly during landing. After undergoing repairs and adjustments the rod was sent to us so that we could verify that the material met the hardness standards required in order to be able to successfully put it back into working use.

While the examples listed above are quite simple testing procedures, we perform many full failure analyses which can include very in depth metallurgical testing. A Failure analysis is the process of collecting and analyzing data to determine the cause of a failure. It is an important discipline in many areas of the manufacturing industry, such as the electronic and medical industry, where it is a vital tool used in the development of new products and for the improvement of existing products. The failure analysis process relies on collecting failed components for subsequent examination of the cause or causes of failure using a wide array of methods, especially microscopy and spectroscopy. While this plays a big role in product development many legal cases require a failure report to determine who or what is at fault for things such as car accidents, ladder failures, etc.